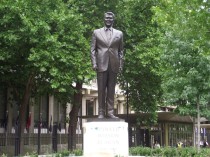 The special relationship that has developed between the United States and the United Kingdom over the past decades has not always been so rosey.

This walk looks at some significant members of US society and their connection to London; from the 'founding fathers' to the UK's first sitting female Member of Parliament.

You will visit the sites of four American presidential statues one of which can be found in the most unlikely of places mounted on American soil and the former home of America's second President.

The tour takes in not only some well known London attractions but also some hidden gems making this two hour tour not only of interest to our American friends but any visitor to this great city.

The cost of this walk is £8 per person (one of the cheapest walks in London) with concessions (£6) for children under 16 and Senior Citizen’s.

If you wish to pre-book or request further details please contact me.

Death in Disguise available at Amazon here or on kindle here.