A Copper's Guide to the Dark Secrets of London's Squares 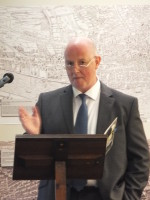 From Copper to Author about my life as a London cop and how that developed into being a published author.

The talk deals with some of the experiences that shaped my career, the sights and sounds that influenced me into writing a book on an aspect of London history that has suffered past historical neglect and link the London Square to events of national and international importance.

The subjects covered in the talk are diverse:

About my talk: This is a power point presentation (although I promise it is not death by power-point) and I require only a screen (or a clear wall). The talk is for 45 minutes followed by a Q&A session which will last as long as the questions keep coming.

If I Hadn’t Laughed I Would Have Cried

This talk examines my career as a London police officer from my recruitment interview and exam to the day I retired – and a lot in between. Having experienced the best and worst of human nature throughout my career, which spanned over three decades, I found that a sense of humour was the greatest attribute I possessed to deal with the stresses of policing.

I have often been asked, following other talks I have given listed on this page, if I could return and talk about my career. So here it is! 45 minutes of anecdotes and memories that will make you laugh and cry. The talk will last for 45 minutes with an opportunity to ask questions.

Death in Disguise – The Amazing True Story of the Chelsea Murders

Violent crime in Chelsea, West London, in 1870, was negligible. This developing suburb of Greater London bore little resemblance to Whitechapel, an area that eighteen years later would witness some of the most savage murders in British history. However, the residents of Chelsea were about to discover that violent murder can occur in any community. The events of May 1870, resulting in the brutal deaths of two of its residents, including a man of God, would attract the attention of a nation as the detective branch of Scotland Yard put together the evidential pieces of this extraordinary crime.

This talk examines the facts from a detective’s viewpoint and asks the questions of its audience: if you were a member of the jury listening to a prosecution case that had not substantiated a motive, found a murder weapon or even proved that the defendant had been at the murder scenes at the relevant times would you have condemned him to the hangman’s rope? Or would you have no doubts that the weight of evidence against the accused pointed to his guilt and that the rope was a just punishment for such despicable crimes?

This is a case that examines the effectiveness of policing in Victorian England and a judicial system that was prejudice to the accused. The talk will last for 45 minutes with the opportunity for questions.

My fee is £75 including any travel expenses.

I am based in East London and Essex and am willing to travel anywhere in the Home Counties or Greater London.

Please contact me for booking details or further information about my talks.

Death in Disguise available at Amazon here or on kindle here.